Quitting caffeine can lead to a host of withdrawal symptoms, and for some people those symptoms can be quite unsettling. The severity and length of the symptoms depend on how addicted you are to caffeine. For heavy coffee drinkers, withdrawals can be a bit hard to deal with. But how long do caffeine withdrawals last?

It varies from person to person. Depending on your level of addiction, withdrawals can last 2 to 9 days. If you consume caffeine regularly and quit it abruptly, you are going to feel the effects of withdrawal within 24 hours after stopping. Even if you consume just one cup of coffee a day, stopping it can lead to withdrawal symptoms.

How the Symptoms Occur

Caffeine is the most widely consumed psychoactive substance in the world. This stimulant blocks adenosine receptors and decreases drowsiness. The neurotransmitter adenosine regulates the sleep-wake process of the body. As these receptors get blocked, you experience a temporary feeling of alertness and wakefulness.

Caffeine also boosts adrenaline, dopamine, and other neurotransmitters and hormones, and reduces the flow of blood to the brain. And when your brain functions without caffeine, you start experiencing withdrawal symptoms. The good news is caffeine withdrawals do not last very long.

The intensity of withdrawal symptoms will be proportionate to the caffeine you consume every day. Common symptoms include headaches, tiredness, and mood changes.

Caffeine withdrawal symptoms are mostly characterized by headaches. The stimulant reduces the blood vessels of the brain, leading to a constricted blood flow in the cerebral region.

And when you stop consuming caffeine, the vessels expand, leading to a higher blood flow. You experience headaches as the brain tries to adjust to this change. The withdrawal headaches go away when the brain manages to adapt to the change.

How long do caffeine withdrawals last, particularly the headaches? The severity and duration of the headaches vary from person to person. In most cases, the duration does not exceed 7 days.

Related: How to Get Rid of Caffeine Withdrawal

Another common symptom of caffeine withdrawal is fatigue. Caffeine blocks adenosine receptors, which leads to reduced drowsiness and improved energy. In some circumstances adenosine causes fatigue. And when caffeine is eliminated from your system, you are likely to feel fatigued and tired.

Fatigue and boredom can be frustrating. But fatigue can help your brain’s neurotransmitters to settle down, and in the long run that can lead to more sustainable energy. Your bloodstream quickly absorbs caffeine and your body excretes it through urine.

As you consume more coffee, tolerance increases, making you dependent on caffeine. The more dependent you are on the substance the worse the withdrawal symptoms will be. But how long do caffeine withdrawals last, particularly this feeling of tiredness? Well, depending on your level of addiction and your metabolism, this feeling can last for up to a week.

As part of your caffeine withdrawal, you may experience negative emotions. The stimulating effects of caffeine result in an increased release of cortisol, adrenaline, and epinephrine. The substance also stimulates the release of norepinephrine and dopamine.

Caffeine withdrawal is also associated with anxiety, depressed mood, and difficulty concentrating. You may experience all these feelings together as your body craves caffeine.

For some people, stopping caffeine intake can be challenging. They continue drinking coffee in order to avoid some really bad withdrawal symptoms, such as nausea and headache. And when these people finally realize that quitting caffeine is worth it, they ask questions about caffeine withdrawals. The most frequently asked question is, how long do caffeine withdrawals last?

To understand the timeline, it is important to know how the body metabolizes this stimulating drug. You feel the stimulating effects about 15 minutes after consuming caffeine. The half-life of this substance is 7 to 8 hours, and it can take up to 10 hours to fully get out of your system.

Withdrawal symptoms typically set in 12 hours after your last cup of coffee. For some people, it can take up to 24 hours. The symptoms may go on their own in a couple of days but can last for up to 9 days.

It is important to remember that caffeine withdrawal is not dangerous, it is just unpleasant. And the symptoms do not lead to more serious problems.

During pregnancy, women are advised to use caution when drinking coffee or consuming anything that contains caffeine. In some cases, irresponsible behavior in terms of caffeine intake can result in miscarriage or birth defects.

If you are breastfeeding, use some caution if you are planning to consume caffeine. The reason behind this advice is that caffeine is a substance that is easily transferred through breast milk. According to the recommendations of the March of Dimes, a breastfeeding woman should not consume more than two cups of coffee a day.

Caffeine is a psychoactive substance, a central nervous system stimulant. Even if you drink a small amount of coffee every day, you will develop some level of dependency over time. And if you stop consuming it, get ready for some withdrawal symptoms. The good news is, caffeine withdrawals are not agonizing. They are relatively mild and depending on your level of addiction, they last only 2 to 9 days. 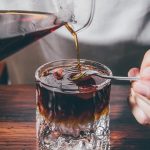 How to Get Rid of Caffeine Withdrawal

Giving Up Caffeine Changed My Life